Weighted blankets have been used as therapy for children suffering from autism for many years. These blankets simulate the sensation of a parent swaddling a baby or getting a hug from a close family member. The recommended weight of the blanket is roughly 10% of an

individual’s body weight. This added weight causes an effect called Deep Pressure Therapy. This pressure triggers a calming sensation on the mind and body. In order to give the blanket the extra weight, small beads are used that can be made of plastic, glass or metal. The blankets are made to be comfortable with soft layers surrounding the weights and also come in a wide range of patterns and designs.

A Little Information About Autism

The CDC now gives the statistic that about 1 in every 59 children is identified with Autism Spectrum Disorder (ASD). Autism is defined as a spectrum disorder due to the fact that symptoms and their severity can range greatly from individual to individual. Those suffering from autism typically have: 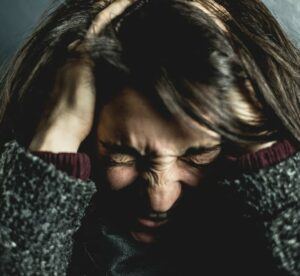 Children suffering from autism struggle with filtering sensations. This is a result of a malfunction in their nervous system causing an overload of signals to the brain. In turn, the brain cannot catch up with the increased number of signals and cannot organize the information it receives. This overload of unorganized signals in the brain causes the child to get upset and they may react with a wide range of unwanted behaviors.  Times like these are when a weighted blanket could especially prove useful. When a weighted blanket is used it helps the nervous system relax, which allows the brain to focus more on organizing all of the signals it is receiving. This gives a child a tool to use when experiencing a signal overload and can help prevent a meltdown.

How Do Weighted Blankets Work?

Well now we know a weighted blanket can calm down an overloaded nervous system, but what exactly is it doing?

All over the body, there are sensory receptors that send signals to our brain when we touch something. This is how we feel things. Scientists in the 1950s theorized about something they called Deep Pressure Therapy. This type of therapy puts gentle pressure evenly on the body. Stimulating the sensory receptors in this way was found to create a calming effect on one part of the nervous system called the Autonomic Nervous System, a system that controls actions we don’t think about like keeping our hearts beating, our breathing, and the digestion of food.

This Autonomic Nervous System can be divided into two systems: The Sympathetic Nervous System (SNS) and the Parasympathetic Nervous System (PSNS). The SNS controls what is known as our “fight or flight” response. When we get nervous, or afraid, or experience stress our heart starts to beat faster, our blood pressure goes up, our breathing increases. Our bodies are preparing to either get into a fight or to run away from one. In this state, it can be impossible to calm down. It can also prevent focus, concentration, and sleep. This is what happens when someone with autism experiences a sensory overload.

The PSNS works in opposition to the SNS, meaning that when you are not experiencing a “fight or flight” response, your heartbeat is reduced, your blood pressure goes down, and your breathing slows. Your PSNS is actively calming you down. This can be helped along by taking a hot bath or relaxing on a couch. This can also be experienced when Deep Pressure Therapy is applied to the body. The SNS backs off with the “fight or flight” response and the PSNS begins to calm the body down.

One of the best things about a weighted blanket is that it is extremely portable. Not only can it be used at home, but it can also be taken to school, on a trip, to the store, or just about anywhere. Therapeutic benefits include:

Weighted blankets are an amazing tool that can help children suffering from autism. They are natural, non-invasive, incredibly easy to use and can provide a wide range of benefits to just about anyone. Any treatment plan for a child with autism that doesn’t include a weighted blanket should be looked at to see it could help.